Dr. Anand Srivastava’s success has its root in his unique background of expertise in Stem cell biology, protein biochemistry, molecular biology, immunology, in utero transplantation of stem cell, tissue targeting, gene therapy and clinical research. There are many scientists who can work in a narrowly defined field but few have broad and multidisciplinary experience to carry out clinical research in a field as challenging as Stem cell biology, cancer and gene therapy field. Dr. Anand Srivastava’s wide-spectrum expertise is rare in clinical research and perfectly crafted to fit ideally with the GIOSTAR projects for Stem cell transplant, cancer and gene therapy research.

Dr. Anand Srivastava’s research work has been presented in various national and international scientific meetings and conferences in India, Japan, Germany and USA. His research articles have been published in peer reviewed medical scientific journals and his work has been cited extensively by other scientists. Dr. Anand Srivastava’s expertise and scientific achievements were recognized by many scientific fellowships and by two consecutive award of highly prestigious and internationally recognized, JISTEC award from Science and Technology Agency, Government of Japan. Also, his research presentation was awarded with the excellent presentation award in the “Meeting of Clinical Chemistry and Medicine, Kyoto, Japan. He has also expertise in genetic engineering research, developmental biology, immunology, making the transgenic animals and his extraordinary expertise of searching and characterizing the new genes are ideal for our ongoing projects of developing the effective treatments for many degenerative diseases, genetic diseases and cancer. Based on his extraordinary scientific achievements his biography has been included in “WHO IS WHO IN AMERICA” data bank two times, first in 2005 and second in 2010. He has been bestowed upon USA Congressional Recognition for his contribution in the field of Stem Cell Science.

Dr. Srivastava is a Chairman and Cofounder of California based Global Institute of Stem Cell Therapy and Research (GIOSTAR) headquartered in San Diego, California, (U.S.A.). The company was formed with the vision to provide stem cell based therapy to aid those suffering from degenerative or genetic diseases around the world such as Parkinson’s, Alzheimer’s, Autism, Diabetes, Heart Disease, Stroke, Spinal Cord Injuries, Paralysis, Blood Related Diseases, Cancer and Burns. GIOSTAR is a leader in developing most advance stem cell based technology, supported by leading scientists with the pioneering publications in the area of stem cell biology. Company’s primary focus is to discover and develop a cure for human diseases with the state of the art unique stem cell based therapies and products. The Regenerative Medicine provides promise for treatments of diseases previously regarded as incurable.

GIOSTAR is world’s leading Stem cell research company involved with stem cell research work for over a decade. It is headed by Dr Anand Srivastava, who is a world-renowned authority in the field of Stem cell biology, Cancer and Gene therapy.  Several governments and organizations including USA, India, China, Turkey, Kuwait, Thailand, Philippines, Bahamas, Saudi Arabia and many others seek his advice and guidance on drafting their strategic and national policy formulations and program directions in the area of stem cell research, development and its regulations. Under his creative leadership a group of esteemed scientists and clinicians have developed and established Stem cell therapy for various types of autoimmune diseases and blood disorders, which are being offered to patients in USA and soon it will be offered on a regular clinical basis to the people around the globe.

GIOSTAR is already the official collaborator of Government of Gujarat, India by setting up a state of art stem cell treatment hospital in Surat civil hospital for the less fortunate tribal populace of the southern belt of Gujarat suffering from Sickle Cell Anemia. Several state Governments in India is looking for a collaborative efforts of GIOSTAR and Dr. Anand to develop the  stem cell transplant program in their respective states. 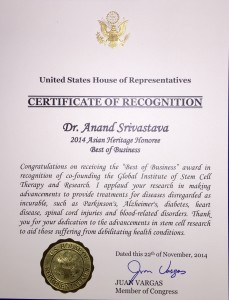 In vivo studies with ES cells

Created a mouse model for Crohn’s disease. In vivo migration of ES cells into diseased portion of intestine. Studies on inflammatory cytokines during the repair of Crohn’s disease with ES cell. Gene regulation studies during this process. Elisa assays for the cytokines. Stem cell niche interaction.

Developed the techniques to isolate the autologous stem cell from patient’s peripheral blood, bone marrow or fat tissues, characterize and activate those stem cells so they can be effectively used for the treatment of specific diseases.