What Is Macular Degeneration?

Age related Macular Degeneration is the leading cause of vision loss and blindness affecting millions of people by the age of 50 years and above. Being a very vulnerable age group, the percentage population affected by different health issues is increasing in this age group. Macular Degeneration is commonly caused by the retinal damage of the eye due to which there can be a severely impaired vision loss.

As per the CDC report published recently apart from other deadly diseases, vision impairment is as well a serious health concern in the developing parts of the world. Precisely, only in US almost 2.9 million adult people are suffering from the vision loss. The report has suggested that approximately about 1.8 million non-institutionalized elderly report some or the other difficulty with basic activity such as bathing, dressing, walking, etc. just because of their visual impairment. National studies are indicating that the vision loss is associated with the higher prevalence of chronic health conditions, fall and injuries as well as depression and social isolation. The issue needs to be tackled carefully because some types of impairments can increase the risk of falls and fractures or if untreated for longer period of time, can also lead to blindness. 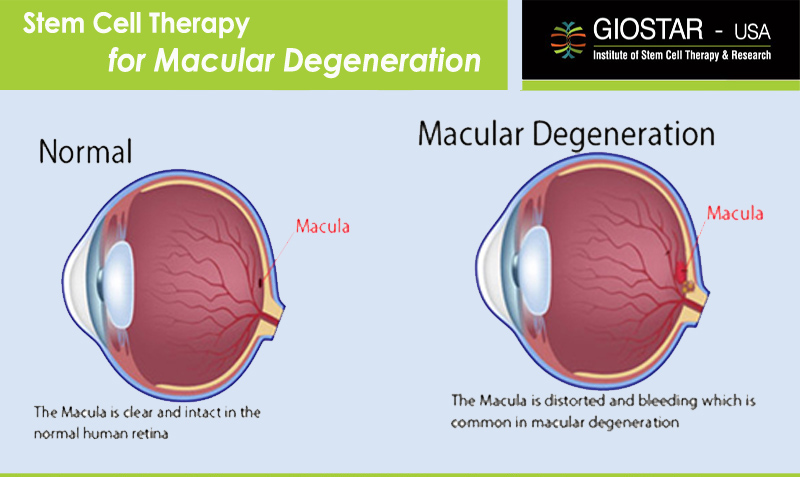 The most important factor that may significantly increase the risk of AMD is the age.  Studies have revealed the fact that people over the age 60 are at a higher risk of AMD than the middle age people; where the risk associated is less than 2%. Additionally, some other factors are as well responsible for increasing the chances of developing the disease such as:

Symptoms of the Age related Macular Degeneration may vary from person to person without any visual differences. The early signs of Macular Degeneration are the distortion of straight lines which may lead to gradual or central vision loss. The person may face the problem reading small print without usual reading glasses.

The AMD is mainly concern with abnormal functioning of MACULA of the eye. The macula is a light sensitive tissue of the retina, centrally placed, behind the eye. The main function of the retina is to convert light or an image into electrical impulses which are sent to the brain through the channelling of the optic nerves.

Wet AMD: – This is a kind of advanced AMD, when there is abnormal growth of blood vessels under the macula. These new vessels are observed to be very fragile, leaking the blood and fluid in the surrounding region. Due to this leakage, macula tends to move upwards from its normal position at the back of the eye. Thus in the wet form of the AMD, there is rapid, progressive vision loss leading to blindness.

Dry AMD: – It is the most common type of atrophic AMD, affecting more than 90% of the people. In this form of AMD, the thinning of the retinal layer, made up of Retinal Pigment Epithelial Cells is mainly observed. The said cells are known to be supporting the light sensitive cells of the eye, the rods and the cones, which are mainly responsible for the vision. Due to progressive loss of RPE cells, the photoreceptors cells are also damaged leading to vision loss.

For the wet form of the AMD, the classical early symptoms are wavy appearance of straight lines, as a result of accumulation of fluid from the leaky blood vessels lifting up the macula. Whereas in the case of Dry AMD; deposition of fatty proteins known as Drusen are observed on the layer of the retina. Drusens are known to be the tiny yellow or white deposits of lipid with different types and level of risks. It has been observed that the Drusen can be the waste products due to failure of the retina to remove dead photoreceptor cells.

Stem cells are the naïve cells of the body, with the capacity to differentiate into any cells of different organs. This power of stem cells has been exploited by the medical science as a boon to treat various degenerative diseases such as but not limited to AMD. The worldwide ongoing research has suggested that the stem cells are the promising candidates to effortlessly replace degenerated or damaged RPE layer in to fresh cells, which is believed to halt or reverse the vision loss associated with the AMD.

Treatment of AMD at GIOSTAR

We have mastered the technology for isolating maximum number of viable stem cells from either the autologous sources of your own body or allogeneically with the matched donor to treat various forms of AMD.

Once infused back in the body, these cells can create a microenvironment necessary for replacing dead or damaged cells of the macula with the fresh cells. Stem cells are also known to have vasculogenetic properties with which they can induce the new blood vessel formation replacing leaky or damaged vessels of the eye.

Thus with our standardized, broad based and holistic approach, it is now possible to obtain noticeable improvements and stoppage of progression in the patients with AMD.