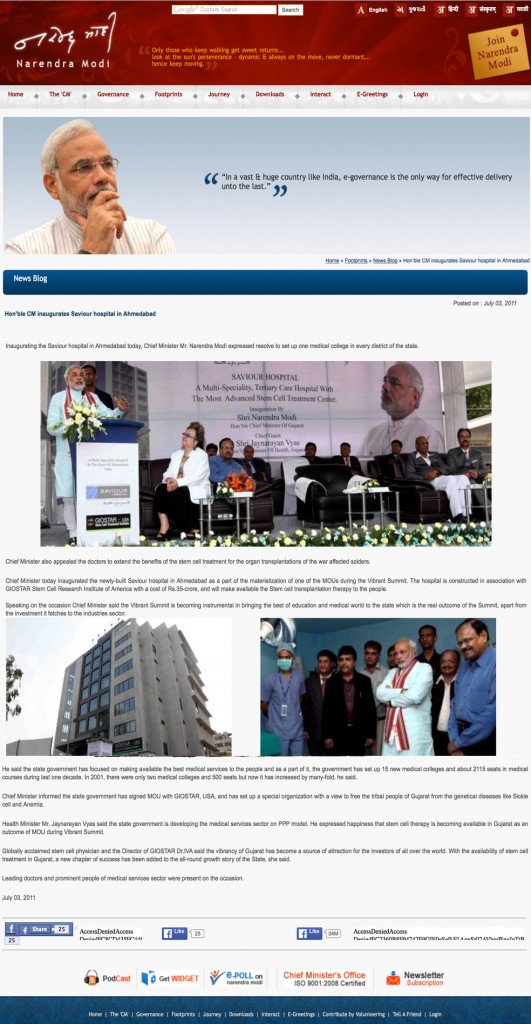 Inaugurating the GIOSTAR Saviour hospital in Ahmedabad today, Chief Minister Mr. Narendra Modi expressed resolve to set up one medical college in every district of the state.

Chief Minister also appealed the doctors to extend the benefits of the stem cell treatment for the organ transplantations of the war affected solders.

Chief Minister today inaugurated the newly-built Saviour hospital in Ahmedabad as a part of the materialization of one of the MOUs during the Vibrant Summit. The hospital is constructed in association with GIOSTAR Stem Cell Research Institute of America with a cost of Rs.35-crore, and will make available the Stem cell transplantation therapy to the people.

Speaking on the occasion Chief Minister said the Vibrant Summit is becoming instrumental in bringing the best of education and medical world to the state which is the real outcome of the Summit, apart from the investment it fetches to the industries sector.

Health Minister Mr. Jaynarayan Vyas said the state government is developing the medical services sector on PPP model. He expressed happiness that stem cell therapy is becoming available in Gujarat as an outcome of MOU during Vibrant Summit.

Leading doctors and prominent people of Medical services sector were present on the occasion.