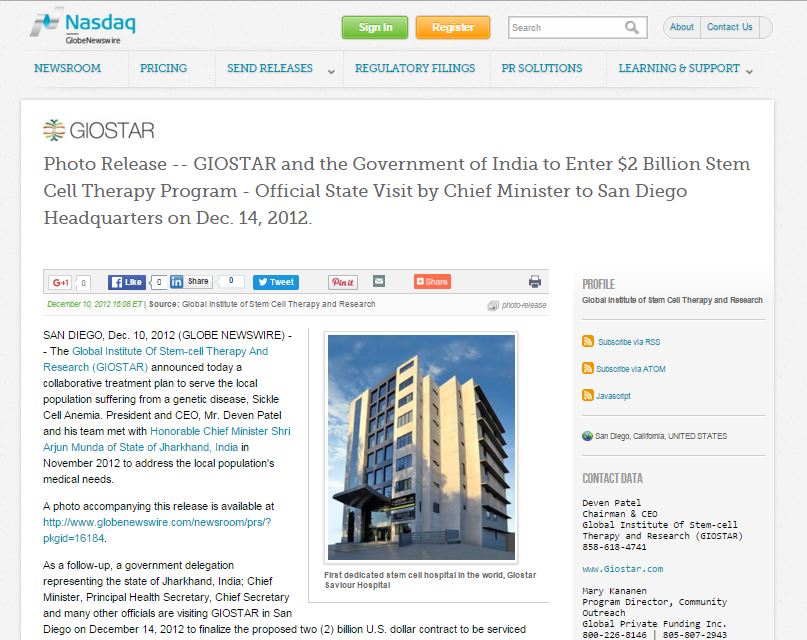 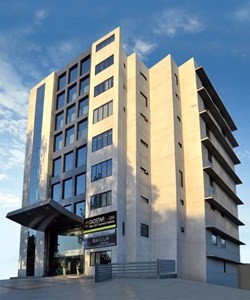 A photo accompanying this release is available at http://www.globenewswire.com/newsroom/prs/?pkgid=16184.

Two hundred (200) jobs are estimated to be created in San Diego and it is expected that the dialog would include an economic development program between City of San Diego and State of Jharkhand, India.

GIOSTAR is a Global Private Funding (Global) incubated company. “Global is a private equity firm that focuses on funding projects and initiatives that are job-creation centric rather than just profit centric. We believe that a venture that draws the best minds and hearts to a unified goal, driven by a unified vision tends to be far stronger and less prone to failure than one driven by just profit. We invest in people, not the business,” said Dr. Sam Senev, Chairman and CEO of Global. Senev added that GIOSTAR is a showcase client focused on both serving mankind through quality of life and job creation.

The Chairman and Cofounder of GIOSTAR, Dr. Anand Srivastava and our team of scientists and clinicians have been associated with leading universities and research institutions throughout USA. GIOSTAR team has extensive research and clinical experience in the field of Stem cell, which is documented by several publications in revered scientific journals.

GIOSTAR in July 2011, inaugurated the world’s first dedicated stem cell treatment hospital, a 125-bed, contemporary facility with the most advanced on-site stem cell laboratory. This hospital is fully operational. GIOSTAR is developing the world’s largest, a three hundred thousand square-foot (300,000SF) state-of-the-art, Stem Cell Treatment Hospital in the Surat Civil Hospital Campus in collaboration with the government of Gujarat. Negotiations are ongoing with China, Philippines, Bahamas, Belize, Thailand, Ukraine and the Middle East to open regional stem cell treatment hospitals and satellite clinics throughout those countries and regions. “We are expanding the GIOSTAR footprint and is in negotiations to open locations near Austin Texas, Phoenix Arizona, and Savannah South Carolina” said Michael Andersen, Vice President of Venture Management at Global. Global and Empyrean West, EB-5 administrators, plan to invest over one hundred and eighty million ($180M) in economic development investments for GIOSTAR projects.

The Global Institute of Stem Cell Therapy and Research company logo is available at http://www.globenewswire.com/newsroom/prs/?pkgid=16183.