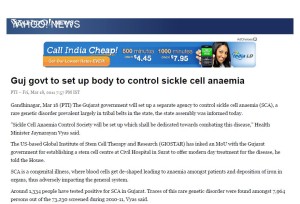 Gandhinagar, Mar 18 (PTI) The Gujarat government will set up a separate agency to control sickle cell anaemia (SCA), a rare genetic disorder prevalent largely in tribal belts in the state, the state assembly was informed today. “Sickle Cell Anaemia Control Society will be set up which shall be dedicated towards combating this disease,” Health Minister Jaynarayan Vyas said. The US-based Global Institute of Stem Cell Therapy and Research (GIOSTAR) has inked an MoU with the Gujarat government for establishing a stem cell centre at Civil Hospital in Surat to offer modern day treatment for the disease, he told the House. SCA is a congenital illness, where blood cells get de-shaped leading to anaemia amongst patients and deposition of iron in organs, thus adversely impacting the general system. Around 1,334 people have tested positive for SCA in Gujarat. Traces of this rare genetic disorder were found amongst 7,964 persons out of the 73,230 screened during 2010-11, Vyas said. Those affected were largely found in tribal belts of districts like Valsad, Dang, Navsari, Tapi, Surat, Vadodara, Banaskantha, Sabarkantha, Godhra, Dahod and Narmada, he said. During a survey, traces of the disease were found amongst 10-14 per cent of the population residing in tribal belts of these districts, the Minister said. Of the 13,67,953 people screened in 64,00,000 tribal pockets so far, 10,475 have tested positive for SCA, while 1,62,706 showed traces of it, he told the Lower House.