What is Cerebral Palsy?

If you are a parent of a child having Cerebral Palsy, with a disability; that considerably limit its motor function, then you have probably landed on a right page, offering an alternative treatment with the significant improvement in a quality of life.

Cerebral Palsy is a blanket term for a brain damage with a motor impairment; caused due to brain injury or abnormal development before, during or immediately after birth. A child with the palsy generally exhibits signs of physical as well as mental impairment. However, the kind and the extent of motor dysfunction, parts of the body as well as the number of limbs involved will be different in different individuals. In short, every case is unique of its kind; one may be totally paralytic and dependent; whereas the other may be slightly symptomatic with little assistance. 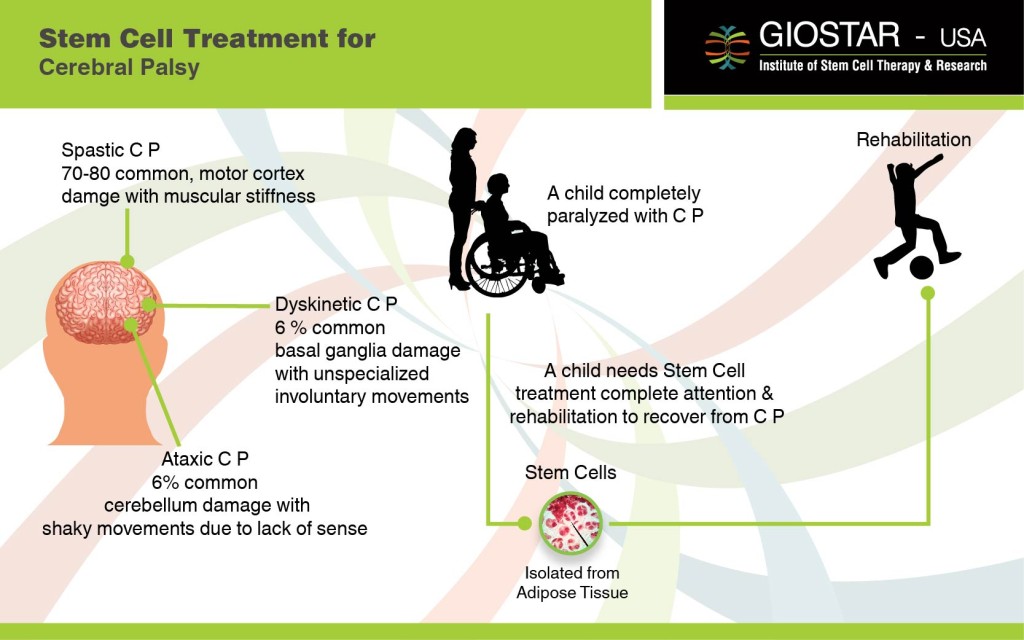 As per the recent report from CDC, Cerebral Palsy is the most common form of childhood neurological disorder; occurring in almost 2 to more than 4 per 1000 live births. The CDC data has as well reported that, it is more common in boys than in girls. About 78% of the children identified with CP had a spastic CP, whereas more than 50% of the children with CP were associated with other conditions such as epilepsy or autism spectrum disorder. The disease actually causes the wide range of difficulties in walking, lack of movement coordination, low intelligence, etc.

Overall palsy can be described in variety of ways as follows:

Spastic CP: – This is the most prevalent type of CP in occurrence causing incredible stiffness in the muscles, probably due to faulty messages being sent from the damaged parts of the brain. It has been reported to be among approximately 41% of the CP cases.

Dyskinetic CP: – This is the type of CP, categorized with abnormal involuntary movements either in the posture or in the limb and around the mouth.

Ataxic CP: – This is the least common type of CP with shaky movements and problem with maintaining the balance.

As such various studies from different corners of the world have linked different causative factors for the occurrence of CP. It has been concluded that the prevalence of CP was observed to be in approximately 6 children per 1000 live births with the weight 1.5 gms to 2.4 gms and almost 59 per 1000 live birth among children weighing less than 1.5 gms. Thus occurrence of CP has been linked up with low birth weight, premature birth. Some studies have also revealed the fact that children born as a part of multiple birth pregnancy through artificial or normal reproduction have higher chances to have CP. During the fetal development, disruption of oxygen supply, ischemic stroke, blockage in the blood supplying vessel can increase the risk of occurrence of CP. The CP can also be related to the infections among mothers such as blood borne infections or fever during labour, maternal genitourinary infections and/or the infections of the placental membranes. Additionally, approximately 10 to 15% of the CP cases are related to brain injuries after birth such as vehicle crashes or falls.

Cerebral Palsy is a neurodegenerative condition with the progressive, irreparable damage of the nervous system. In case of severe forms of CP, signs are often visible immediately after birth; however some of the other signs of CP can follow unique patterns such as:

Since CP is associated with the brain damage, it can as well affect other brain functions such as:

What goes wrong in Cerebral Palsy?

Since no single factor is found to be responsible for the occurrence of CP, it is rather difficult to point out at the damage of the brain, thus many different things can synchronized together to conclude the exact cause of damage. The human brain is the central processing organ, which passes on the information through its own messengers known as Neurons or Brain cells. These messages are passed on in the form of a specific codes or signals which are decoded by the organs for their implementations. Any problem in the entire information system can lead to the faulty implementation like genetic changes in the neuronal development, faulty insulation causing nerve damage and affecting signal transmission, autoimmunity damaging own cells responsible in the transmission, faulty connections halting the transmission of messages, etc.

With the traditional medicinal approach, there is no cure for CP; however some rehabilitative approach can be followed to minimize the symptoms such as physical therapy, occupational therapy, and speech therapy. Additionally some steroidal oral medicines are as well available to relax stiff muscles, although long term use of the same can be fatal causing dangerous outcomes. However with the advancements in the science and technology, it is now possible to offer stem cells treatment to the children with CP as the best available, non invasive alternative that can reduce the symptoms as well slow down a progression of the disease. Various strategies have been applied by the medical science to limit the brain cells damage and reduce the symptoms with the help of stem cells. Stem cells are the naïve cells of our body, which are capable of differentiating into various other cells of our body. Their unique differentiation, unlimited multiplication property is making them very special in the application of regenerative medicines. With the help of technical advancements these stem cells can be isolated from our own body and utilized in a very unique way to provoke neuronal precursor cells of the brain and spinal cord in a rapid production of new neurons which can replace damaged one to restore the function back. These cells can thus differentiate into required cells, regenerate damaged cells and help in resuming the function of the damaged organs under suitable conditions.

Treatment of CP at GIOSTAR

We have mastered the technology for isolating maximum number of viable stem cells from either the autologous sources of your own body or allogeneically with the matched donor to treat various forms of CP.

Once infused back in the body, these cells can reach at the targeted site through their strong paracrine effects and differentiate into lost neurons or help revive the damaged ones to restore their function back. These stem cells have also observed to be promoting vasculogenesis to increase oxygen supply to the blood for speedy recovery from Autism.

Thus with our standardized, broad based and holistic approach, it is now possible to obtain noticeable improvements in the children with CP, in the symptoms as well as their functional abilities.